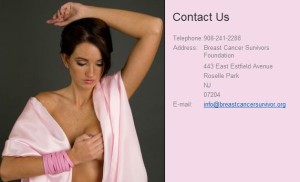 So who else keeps getting calls from a charity called Breast Cancer Survivors Foundation out of Roselle Park, NJ?

The helpful solicitor could tell me nothing about the charity other than it was based in Roselle Park NJ and gave a toll-free number to call 1-800-930-1220.  The other number I found on the charity is 908-241-2288.  These calls always go to an answering service in Madison, Wisconsin.

So I went looking for a webiste on this charity.  I posted my favorite photo off it of a woman with big huge fake boobs feeling herself up in a purported self-exam and sporting lots of my favorite things – pink plastic bracelets. As a matter of fact all their stock photos show women with large perfect boobs which is sooooo realistic to us survivors, eh?

I went to Guidestar for information – not much to be found and interestingly enough no IRS form 990s to view.  So I called the consumer/charity division of the Attorney General’s Office for the state of New Jersey -973-504-6215.  And interestingly enough I found something on them on the State of Washington’s website .  This site says in 2010 they had revenue of $531, 041 and expenses of $479,111 . They also listed the paid fundraisers who received money from them: Preferred Community Services, Inc., Non-Profit Services, Inc., Outreach Calling, and Safety Services, LLC

The woman in the NJ AG’s office was very helpful.  She walked me through an online public records request (I love sunshine!!) and told me that as per their records the “charity” has been in biz since 2009 and as of their last filing with the State of NJ 99.96% (I think I heard that right, but I will know for sure when I get the records) of what they take in goes to FUND RAISING.  No real money towards programs?  And they are fundraising for breast cancer survivors?  To what end?

I am still digging on these people, and my gut check is negative on them, so I say once again if you don’t know the non-profit and don’t know what they do and the solicitors  seem sketchy on the phone, listen to your instincts and ask to be put on the DO NOT CALL LIST.

Breast cancer is hard enough without wading through charity calls from people who can’t tell you where they got your full name and phone number.  And oh yeah, one other thing.  When you plug the charity’s address into Google (443 E. Westfield Ave Suite 1
ROSELLE PARK NJ 07204 ) you come back with a doctor’s office (and some amusing reviews of said doctor).  Very curious indeed….because when I called that doctor’s office phone number  they gave me the phone number of this Breast Cancer Survivors Foundation to call.   They did not seem surprised to get a call for this “charity”.  I don’t know what to think….

When I discover more on these people I post what I learn.

View this document on Scribd

168 Responses to getting solicitation calls from breast cancer survivors foundation?