This is what makes me dislike non-profits. There is only so much giving one can do in a calendar year, and well Penn Medicine? I give enough right now. I was so excited to have FINALLY paid off my oncology/radiation bills which were quite expensive and took a few years. That was not through Penn, that was through Lankenau because at the time Penn did not have a location for radiation close enough to where I was working, and well, I worked through breast cancer treatment.  They also did not have the radiation oncologist I wanted.

But seriously, there I am doing my happy dance because I finally paid off radiation – every single penny they said I owed….and…wait for it…along comes a series of bills related to 2017 procedures and a surgery that equal a few thousand more  in hospital and hospital related bills.  I think I did cry when I got them out of sheer frustration. In addition to these bills, I have has SO many co-pays in 2017, including $70 for every physical therapy session, multiple times a week for months – which I paid because I need the therapy. And my knee surgery anesthesia was also an additional bill because the anesthesia is a practice within Chester County Hospital where I had my surgery and not under the hospital umbrella, so that bill counted like an out of network thing.

At almost the same time I am getting these bills I get a letter asking for an additional donation on top of the non-profit events I support annually. 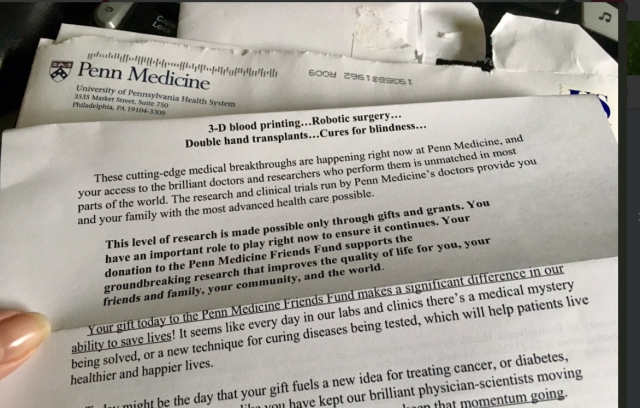 I took to twitter and told Penn Medicine how I felt:

This cause a flurry of communication from Penn Medicine promising to do better. Apparently that promise meant additional solicitations?

So I sent my new e-mail buddy a response to his e-mail this morning:

Oh I got your letter all right and I put it on Twitter because it was kind of offensive to receive a request for a donation practically the same day I found out I had over $4000 in residual hospital bills from a recent surgery and procedures.

Always a hand out means I stop supporting and so do many others.

And the fact that I have a few thousand dollars outstanding in bills I owe the hospital for which I am obligated unless of course I wish to send tax returns and pay stubs and other dehumanizing things to be quantified as a “charity case”.

I think in 2017 I have contributed quite enough to the hospital’s bottom line.

Furthermore, I support events like the annual wine festival to crush cancer at the Dilworthtown Inn, and Chester County Day.

In addition to supporting those events I also write about them free of charge on my website http://www.Chestercountyramblings.com – that’s free advertising for Penn’s events. I don’t get any kind of donation in kind letter for that, and as you know the cost of advertising and marketing, that’s quite a nice donation in addition for which I don’t get credit.

Until this year my personal email address was only in the system for the nonprofit events that I support that I mentioned, and so I could communicate with my care team via my Penn medicine.

Writer, blogger, photographer, breast cancer survivor. I write about whatever strikes my fancy as I meander through life.
View all posts by carla →
This entry was posted in breast cancer, health insurance and tagged annual and special gifts penn medicine, penn medicine, senior director, thomas f white. Bookmark the permalink.