I was speaking with someone today about 3D mammography.  Also known as digital breast tomosynthesis (tomo).  Guess what I learned? While health insurers argue about paying for this kind of mammogram, apparently those on Medicare or Social Security can get this new and definitely improved mammogram and how crazy is that? If the U.S. Government thinks it is OK, why not all health insurers?  of course this is what I now fear and I won’t know until my next mammogram if Aetna will continue to pay for the only mammogram that really works on my dense breasts.

Flash back five years ago this time. They knew I had a lump. Only on traditional mammography AND ultrasounds nothing showed up as suspicious. Yet they knew it was there. Crazy. And yet I read articles all of the time that talk about how insurance companies won’t pay for 3D. Here are some interesting statistics on how much more effective 3D is:

Results from studies such as “Breast Cancer Screening Using Tomosynthesis in Combination with Digital Mammography” (Journal of the American Medical  Association, June 2014) have been cited everywhere from Web MD to the evening news. This particular study sampled nearly half a million patients and is the largest study on digital breast tomoysnthesis known to date. The results were quite impressive:

Right now I am sort of a bundle of nerves.  It is the whole almost five year thing.

Here is an Op Ed from this week about 3D mammography:

Here’s a medical fact that should be uncontroversial: the better your mammogram, the more likely you are to beat breast cancer.

Indeed, detecting breast cancer is among the most important health challenges of our time. Why, then, aren’t more health insurers covering breast tomosynthesis, commonly known as 3D mammography?

Here’s what we know. Early detection is the best defense against breast cancer. Yet even digital mammograms offer only a two-dimensional picture, which means your doctor may miss your deadly cancer legion or see one where none exists (a false positive).

3D mammograms were developed to conquer these limitations. They allow the radiologist to examine breast tissue layer by layer. When screened this way, fine details become significantly more visible.

Some say that 3D mammograms are still experimental or investigational. On the contrary, they were approved in 2011, and have since been widely adopted around the country. Last year, of the 35 million women in the U.S. who were screened for breast cancer, 10 million underwent a 3D mammogram.

What’s more, the clinical results are consistently clear. Data published in hundreds of peer-reviewed publications reviewed 750,000 exams. The numbers speak for themselves: 3D mammograms reduce false positives by up to 40 percent; detect invasive cancer more accurately by 41 percent; reduce the need for a diagnostic mammogram by up to 37 percent; and strengthen the positive predictive value of a biopsy.

As a result, costs for patients, insurers, employers are lowered; recalls are reduced; and cancer is detected earlier.

Still, some insurers remain unconvinced. They ask, “Does the data stand up over time?” It does. Just last month, the University of Pennsylvania published a large, longitudinal study in JAMA Oncology. (This is the fourth independent study of its kind.) Not only did 3D mammograms dramatically decrease the number of callbacks for unnecessary follow-ups, this breakthrough was also sustained over time. At my institution, the results are not only sustained, but continually improving over time.

The study found the same pattern for the detection of invasive cancers: on average, these killer cancers were identified 15 months earlier.

Connecticut must be a hot bed battle ground as I found another article  about 3D in the Hartford Courant that had a great photo of a billboard I approve of (and I hate billboards). Apparently one is right outside Aetna headquarters: 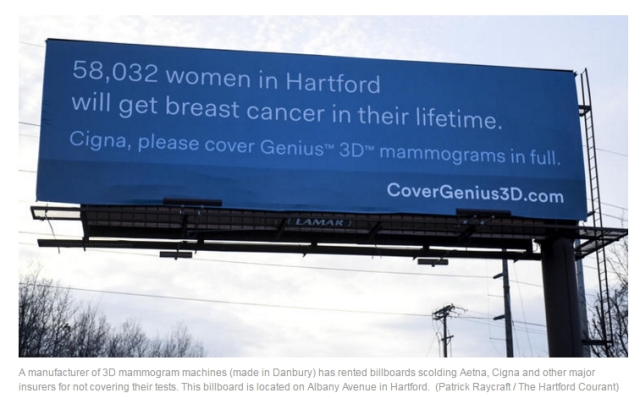 Now theoretically I should be OK since in Pennsylvania they mandated by law women should be able to get 3D mammmograms :

Women in Pennsylvania who undergo breast cancer screening with the latest advance, three-dimensional mammography, will not be charged extra for it.

Gov. Wolf’s office announced a new policy Monday under which insurers must cover all screening mammograms, including the 3-D versions, at no out-of-pocket cost to consumers.

Three-dimensional mammography, also known as tomosynthesis, was approved in the U.S. in 2011 for use in combination with standard two-dimensional imaging. The dual approach is catching on, bolstered by rigorous research that shows 2-D plus 3-D increases breast cancer detection while reducing false alarms. Although the radiation dose is doubled, it remains below safety limits and can be reduced even further with the newest computer software.

Some insurers still consider 3-D to be experimental and don’t automatically cover it. But last year, the American College of Radiology declared it is no longer investigational. This year, Medicare began covering 2-D plus 3-D, reimbursing an extra $56 over 2-D alone, according to the radiologists’ group.

Yeah OK.  I need to get my mammogram scheduled.  Enough avoiding it.  I have never avoided them before so I need to stop being a big baby. Yes I know I am being a big baby.  Five years is a big deal. I am nervous and realistically I don’t know that I have anything to be nervous about. Just overthinking things.

Hey you out there? Do YOU need a mammogram? What are you waiting for? If I have to go, you too.

Writer, blogger, photographer, breast cancer survivor. I write about whatever strikes my fancy as I meander through life.
View all posts by carla →
This entry was posted in breast cancer and tagged 3D mammography, breast cancer, digital breast tomosynthesis. Bookmark the permalink.